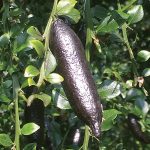 Finger Limes – Often referred to as “caviar limes”, they can be used as a garnish or added to various recipes. Upon slicing the open, squeeze the husk with your fingers and the vesicles will pour out of the husk in tact. They have an authentic lime flavor, but with a subtle sweetness that pairs well with anything you would garnish with a dash of lime. 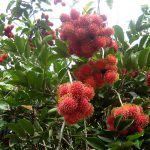 Rambutan – The rambutan, is a close relative of the lychee. It distinguishes itself from the lychee by its soft, red hairy rind. Sometimes, it is called the hairy lychee and it derives its name from the Malaysian word for hair, “rambut.” It is juicy and sweet like the lychee, but less acidic in flavor. 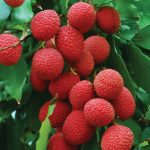 Lychee – Lychees originated in the subtropical low elevations of Southern China over 2000 years ago in the provinces of Kwangtung and Fukien. Once the skin has been easily peeled off, the translucent grape-like fruit is exposed. 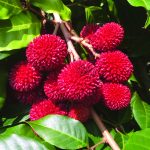 Pulasan – Pulasan, originated from Malaysia and is the cousin of the hairy rambutan but is bigger, sweeter and the flesh does not stick to the seed. The flesh is sweet and slightly juicy, plus the seed is edible and tastes like almond. 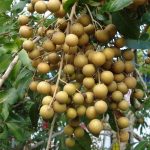 Longan – Longan, sometimes known as “dragons eye” are well recognized as a premier tropical fruit in Thailand and China. The longan is a succulent fruit that is fragrant, sweet, extremely juicy, easy to eat, and consistently outranks other varieties in taste tests. 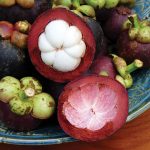 Mangosteen – Mangosteen is acknowledged as the ‘Queen of the Fruits’ for its countless qualities and benefits. The mangosteen has a tough, leathery purple rind that encloses white fruit segments.The flesh is juicy, sweet and slightly tart. It is known to be very high in anti-oxidants and is prized for it’s anti-aging benefits.

Sapodilla – The sapodilla is believed to be native to Yucatan and possibly other nearby parts of southern Mexico, as well as northern Belize and northeastern Guatemala. The flavor is sweet and pleasant, ranging from a pear flavor to crunchy brown sugar. 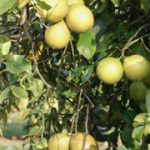 Meyer’s Lemons – The Meyer lemon was introduced to the United States from China by Dutch plant explorer Frank Meyer. It is thought to be a cross between an acidic lemon and a mandarin. It has a sweeter, less acidic flavor than the more common lemon and a fragrant edible skin. 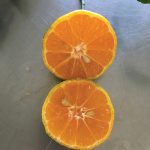 Manadarin Lime – Also known as Rangpur, the mandarin lime is a hybrid between the mandarin orange and the lemon. 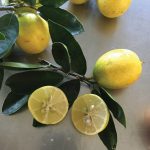 Limequat – Is the result of a cross between the key lime and the kumquat. It has a sweet tasting skin and a bitter sweet pulp that tastes similar to limes.

Tangerine – Tangerines being in the citrus fruit group which has a loose and easily peeled skin that zips right open. The sections of tangerines separate easily and are very sweet.

Seedless Limes – Also known as Tahitian limes, they have a fairly thin rind and their flesh is pale green, seedless, and juicy.

Breadfruit (Ulu) – Ulu, as it is named in Hawaiian, was one of the few subsistence plants the Polynesians brought with them when they sailed to the Hawaiian Islands. Like the banana and plantain, the breadfruit may be eaten ripe as a fruit or underripe as a vegetable. For the latter purpose, it is picked while still starchy and is boiled or, in the traditional Pacific Island fashion, roasted in an underground oven on pre-heated rocks. Sometimes it is cored and stuffed with coconut before roasting. Malayans peel firm-ripe fruits, slice the pulp and fry it in sirup or palm sugar until it is crisp and brown. Filipinos enjoy the cooked fruit with coconut and sugar. 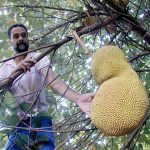 Jackfruit – The jackfruit is believed indigenous to the rain forests of the Western Ghats of India. Jackfruit is the largest tree-borne fruit in the world, reaching 80 pounds in weight and up to 36 inches long and 20 inches in diameter. The exterior of the compound fruit is green or yellow when ripe. The interior consists of large edible bulbs of yellow, banana-flavored flesh that encloses a smooth, oval, light-brown seed.

Soursop – Originally grown in the West Indies and tropical America, the Spanish name is “Guanabana”. The Soursop is usually processed into ice creams, sherbets and drinks, but fiber-free varieties are often eaten raw. 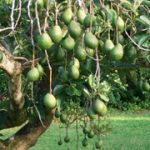 Avocados – Originally from Central America, avocados are widely grown in the tropics and subtropics. A few of the varieties we grow are Sharwil, Green Gold, Murashige, Yamagata and Malama. We grow a variety of Avocados with the goal of harvesting all year long

Washington Navel Orange -These are considered by many to be the best oranges in the world for eating out of hand. They have a meaty flesh, their thick rinds are easy to peel, the segments separate easily, and they have no seeds.

Yuzu – The yuzu is a Japanese citrus fruit which is about the size of a tangerine and quite sour. Most commonly the rind is used to flavor various dishes such as vegetables, fish or noodles.